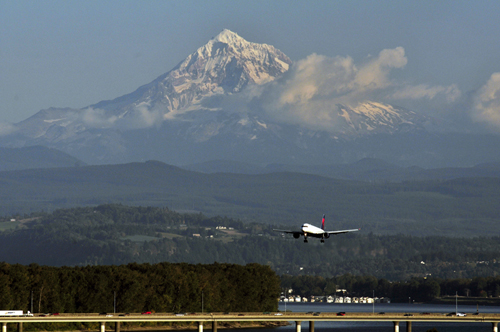 If you flew into PDX this holiday season, it’s possible you may have been on a flight starting to use new technology in their final approach to the runway. The Federal Aviation Administration published flight approach procedures for its Next Generation Air Transportation System, also known as NextGen, in September. The satellite-based aircraft navigation system is gradually replacing the nation’s legacy ground-based equipment network and is designed to help pilots fly existing routes more precisely.

The new system brings multiple benefits. NextGen technology gives pilots the ability to fly an optimized profile descent, also known as a continuous descent approach. The approach enables the aircraft to maintain a continuous descent from the point of initial descent to the runway using a lower power setting and higher altitude for less noise and less fuel, thus reducing air emissions.

“From helping us minimize aircraft noise, to reducing aircraft carbon emissions, NextGen has numerous benefits for PDX and our community,” said Jason Schwartz, Port of Portland noise management manager. “We have many to thank for helping bring NextGen to PDX, including the FAA, the PDX Citizen Noise Advisory Committee, Alaska Air Group, Southwest Airlines and SkyWest Airlines.”

Procedures at PDX for using satellite-based technology for departures have been in place since 2008 and have proven successful in helping aircraft follow noise abatement routes. Most commercial aircraft using PDX are equipped with the advance avionics in the cockpit needed for NextGen navigation. Early estimates show that 10-20 percent of flights will use new NextGen arrivals procedures initially, and others will phase in over time. Next spring, the FAA plans to release arrival procedures, which will guide aircraft that are further out from the airport.

For more information about how innovation and technology are yielding environmental and community benefits in the aviation industry, check out FAA Administrator J. Randolph Babbitt’s discussion on the topic.