Wintertime is the perfect time to plant trees! Nestled within the industrial core of Northeast Portland is a little known gem of a city park called the Columbia Children’s Arboretum. The park was the scene of the third of seven tree plantings the Port of Portland is sponsoring with Friends of Trees during their current planting season. The previous two events included one in Hillsboro near one of the Port’s mitigation enhancement projects at Jackson Bottom Wetlands and a large-scale planting at the Sandy River Delta. The remaining plantings will take place in the Argay, Parkrose, Parkrose Heights, Russell, Sumner, Wilkes, Concordia, Vernon, Beaumont-Wilshire, Cully, and Roseway neighborhoods. Check out Friends of Trees’ latest edition of Treemail to learn more about the Columbia Children’s Arborteum.

This winter also marked the final phase in the PDX Tree Obstruction Removal project. Removing the trees and stumps which were beginning to interfere with federally-regulated airspace around Portland International Airport, cleared the way for replanting this February. Workers planted more than 23,000 native shrub and small tree species such as vine maple, Oregon grape, red-flowering currant and native roses and willow amongst other lower-growing vegetation that was allowed to remain on-site. 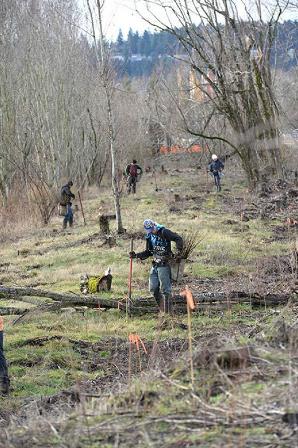