According to a Natural Resources Defense Council report released last year, 40 percent of food in the United States goes uneaten. The statistic is particularly alarming considering the amount of people that go hungry every day. Port of Portland staff recognized an opportunity in our own backyard and recently launched a food donation program, facilitating partnership between St. Vincent de Paul and concessionaires at Portland International Airport. The program encourages food and beverage vendors in the airport terminal to divert unsold, ready-to-eat food products to the local charitable organization. Products include sandwiches, salads, parfaits, baked goods and uncut produce.

The program launched in February and PDX concessionaires donated so much food that by the end of the first pickup day on February 5th, the Port and St. Vincent’s staff needed to round up a second donation storage refrigerator. In the first two months of collection, donations weighed in at 2,760 pounds of food – equivalent to more than 1,830 meals. The food ends up with social service providers City Team Ministries, Northwest Family Services and St. Vincent’s mobile full-service kitchen.

“This is a win-win for local communities in need and for the airport, too,” said Walt Marchbanks, Port concessions operations manager.

Not only is the program matching high quality food with agencies that can distribute it, it’s removing food items that serve a higher and better purpose from the waste stream at PDX. In 2012, PDX collected a record 201 tons of food waste for composting. By continuing to donate at least 50 to 100 pounds of high quality food to St. Vincent’s three times a week, the program could divert 5 to 10 percent of what would have ultimately ended up in the compost stream. 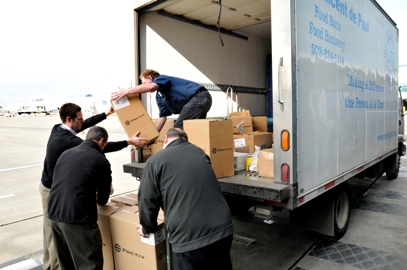